A fascinating article from the Smithsonian Online magazine by Nora McGreevy, a freelance journalist based in Chicago details this story. She can be reached through her website, noramcgreevy.com.

In 1815, exiled Spanish king Joseph Bonaparte fled to the U.S., where he lived in luxury at a sprawling, 60-acre mansion

By Nora McGreevySMITHSONIANMAG.COM
MARCH 23, 2021 6:30AMAfter his defeat at the Battle of Waterloo in 1815, British forces sentenced former emperor Napoleon Bonaparte to live out the rest of his days—most of which were spent in poor health—on a remote island in the South Atlantic.Comparatively, Napoleon’s older brother Joseph had an easier time in exile. After the French emperor’s downfall, the elder Bonaparte, who’d briefly served as king of Spain and Naples, headed to the United States, where he settled on a bluff overlooking the Delaware River in Bordentown, New Jersey. Between 1816 and 1839, Bonaparate lived on and off at a property dubbed Point Breeze, spending the remainder of his adult years in resplendent luxury.https://20dd7dcb70238357d559cfc3f3cc8774.safeframe.googlesyndication.com/safeframe/1-0-37/html/container.htmlFew traces of this sprawling, 60-acre estate remain standing today, notes Daniel E. Slotnik for the New York Times. Soon, though, history lovers will be able to explore the ruins, including a gardener’s house dated to about 1820, a bridge and mounds of buried bricks, for themselves: As Michael Mancuso reports for NJ.com, the State of New Jersey, the City of Bordentown and preservation nonprofit D&R Greenway Land Trust partnered together last fall to purchase the estate for $4.6 million. Officials plan to turn the majority of the land into a state park and museum. A portion of the property will be repurposed as city administrative buildings.Per NJ.com, a museum in the 200-year-old gardener’s house could open as early as this fall. In the future, writes Kevin Riordan for the Philadelphia Inquirer, the site’s new caretakers hope to install audio tours and historic signage throughout the area.Attributed to American painter Charles Lawrence, Point Breeze, the Estate of Joseph Napoleon Bonaparte at Bordentown, New Jersey, circa 1817–20 (Public domain via Art Institute of Chicago)The estate most recently served as a home for the Catholic group Divine Word Missionaries. Twentieth-century buildings once occupied by Divine Word will be converted into a new Bordentown City Hall, community center and police department, according to the Philadelphia Inquirer.

Overall, Linda Mead, president of D&R Greenway, tells the Times, the project presents “a real opportunity to celebrate the history and at the same time make this very relevant to people today who want to come and walk on the trails, learn about the land and possibly even garden on the property.”

In 1806, Napoleon issued an imperial decree making his brother king of Naples. Two years later, during the Peninsular War, the French emperor forced Spain’s king, Ferdinand VII, to abdicate and appointed the elder Bonaparte in the Bourbon monarch’s place. The new king ruled Spain as José I until 1813, when he returned home to France.

After his younger brother’s empire came crashing down, Bonaparte fled to the U.S., briefly settling in Philadelphia before purchasing Point Breeze in 1816, notes Jesse Greenspan for History.com. (He would later go on to purchase an even bigger property in upstate New York.)

At Point Breeze, Bonaparte constructed one of the marvels of 19th-century America: a magnificent estate that featured decorative gardens, 12 miles of carriage trails, a number of brick bridges, underground tunnels for transporting luxury goods from the docks and a man-made lake. According to NJ.com, the self-exiled ruler hoped to recreate the luxury of Château de Mortefontaine, his former home in France.

“Swan boats glided on the half-mile-long lake [Bonaparte] created,” reports the Philadelphia Inquirer. “Tulip poplars rose skyward from a carefully curated ‘picturesque’ landscape that he designed and whose style he helped popularize.”

At the heart of the estate stood a palatial three-story mansion—the largest building in America save for the White House. There, Bonaparte displayed his extensive collection of fine art and allowed townspeople to take tours of his library, which held more volumes than the Library of Congress, making it the biggest collection in the country at the time.

In 1838, Bonaparte left Point Breeze for the final time. He suffered a serious stroke in 1840 and died four years later, at the age of 76, in Florence, Italy. After his death, the New Jersey estate changed hands several times; most of its Bonaparte-era buildings were torn down.

Peter Tucci, a board member for the Bordentown Historical Society and D&R Greenway, is a community member and history enthusiast who campaigned for the Bonaparte estate to become public land. He tells NJ.com that Bonaparte relied on hundreds of people from the surrounding New England towns to run his estate.

“[T]he best way to think about it is for the people of Bordentown, he was really like a one-person WPA project,” Tucci says. “He literally employed hundreds of workers from Bordentown and the surrounding areas and paid them a very fair wage. And he spent roughly 20 years in Bordentown, most of his adult

Per the Inquirer, D&R Greenway is now working to restore the gardener’s house—the only extant structure dating to Bonaparte’s time in residence. The group also plans to replicate the many vegetable gardens that flourished in the former king’s lifetime.

Monmouth University professor Richard F. Veit, who previously conducted a three-year excavation at Point Breeze that unearthed more than 20,000 artifacts, tells the Inquirer that for much of the mid-19th century, Point Breeze stood as a premier example of “picturesque” landscape architecture, a school of gardening that emphasized natural harmony and expansive landscapes.

“Point Breeze was a big estate on America’s highway between New York and Philadelphia, and everyone saw it and commented on it,” Veit says. The scholar adds, “It’s fantastic that several folks came together and formed this great alliance that allowed them to think outside the box and save one of the region’s great treasures.”

Why does this interest me? Because Romaine Goddard Brooks charged her lover, Natalie Barney with researching a vague reference her mother, Ella made about their being related to the Bonaparte Family.

In the course on my research I was surprised that Romaine who seemed unimpressed by the European Aristos she met and painted, would be the least bit interested in following up such family lore. But she was so I dug deeper. I found out that a relative of Barney’s lived in Philadelphia and went to the trouble of researching Romaine’s paternal side of the family, the famous Goddard furniture dynasty and discovered a letter stating that they were related to Joseph through marriage. Why this mastered to Romaine remained unknown?

Indeed, there was no love lost between Romaine and her father, who was an alcoholic. In fact, she only met him once, wasn’t impressed, and would have had no respect for him since her mother had given him a small pension to get rid of him. Ironically, this made Romaine an aristocrat in her own right, although not a Princess of the Blood like Lily de Gramont, leaving Natalie the only untitled partner in their polyamorous relationship. But Natalie earned her own title as the High priestess of love conferred on her by the author of Nightwood, Djuna Barnes. 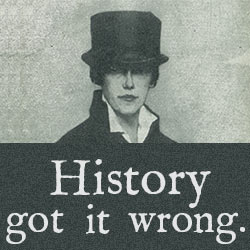