Romaine Brooks would have been highly amused by the latest edition of the Metropolitan Museum of Art’s Costume Institute’s exhibit, Camp: Notes on Fashion. The show is an annual May fundraising event and comes on the heels of Romaine’s birthday which I recently blogged about with Suzanne Strohn( http://www.suzannestrohcreative.com/romaine-brooks-145-stonewall-50/ ).

CAMP: Notes on Fashion, reprises lesbian icon Suzanne Sontag’s groundbreaking essay published in 1964. Camp is many things to many people. Chaired by Gucci Creative Director, Alessandro Michele, energized by Vogue, editor-in-chief Anna Wintour, and Harry Styles, Lady Gaga and Serena Williams and supported by Gucci and Conde Nast, this is an intentionally slick, safe, fun party for the rich and famous.  Tickets are expensive and are snapped up by the wealthy and celebrated who strut the red-carpeted steps of the Met like royalty. Indeed, they are the cream of the art, fashion and corporate worlds. 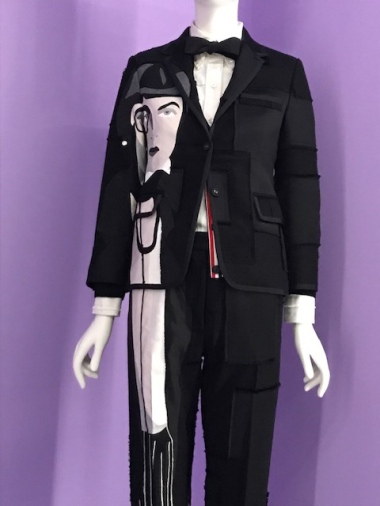 Romaine was famously introverted yet she played hostess to the likes of Zelda and Scott, Virgil Thompson, and many other luminaries.

She loved to dress up and parties. What she did not like was being on parade at her lover Natalie Barney’s famous international salon. If Romaine had succumbed to attending the Met gala she would have been paradoxically flattered and disdainful of Thom Browne’s homage to her portrait of Una, Lady Troubridge which is prominently on display in the Camp exhibit.

Brooks and her muse and lover, Ida Rubinstein, the lady Gaga of her day set fashion and style in their individual performances. Both exhibited conspicuous outrage, a marker of high fashion. But, it is Brooks’s performative self-portrait of 1923 that takes center stage. You may ask why? The answer brings us right back to what distinguishes high camp from empty kitsch.

For gay people, high camp is the essence of resistance, subversion, and mockery as well as what Japanese gay author, Yukon Mishima define as, Miyabi--courtly elegance. It is radical, it is queer. Both Natalie Barney and Romaine Brooks were well aware of these distinctions.

As lesbians they were both out and, they were both radical, lesbian feminists at a time when it was hardly fashionable to be so open about their love of their own sex. Natalie was notorious and shunned by many of the gratin (French high society) and wealthy Americans. Romaine entertained privately, usually small select groups of people. She painted the gay, lesbian and creatives who attended Natalie’s famous salon. But she also painted the Weeping Venus, a collaborative effort and highly political, inspired by Natalie’s poem of the same name that lamented the subservient status of women in society. Today, they would have both been at the head of any demonstration protesting the control of women’s bodies by men, ie. the states of Georgia, Ohio, and Alabama.

Lily de Gramont, a princess of the blood, part of the happy threesome that made up their complicated family, was a social commentator, a friend of Marcel Proust, and a great party thrower and goer. She would have loved the Met Gala and dressed to the nines while reporting on the various luminaries there. She was a taste-maker and breaker. A social arbiter as well as author and translator in her own right. But, Lily also was known as the “Red Duchess” because of her embrace of Communism. While she spoke for the workers, she nonetheless retained her aristocratic status, although being supported by Natalie after she left her abusive husband despite being a working journalist.

As New York gears up for the 50th-anniversary celebration of the Stonewall riots of 1968, it seems all the cultural institutions in the city want to get in on the act. Therefore, the Met theme makes perfect sense.

I wish I could say I loved the show because I do love and admire camp and fashion. The problem for me as a gay person who has modeled and had my fling with fashion as a younger woman, is that having grown up with gay camp; think drag queens in Miami Beach, gay bars, and the gay entertainment scene I found the Met’s notion of camp lacking in radical, queer resistance.

Missing from the Met’s pink boutique, Quentin Crisp, Keith Herring’s extraordinary self-portrait as one of his artworks (photographed by Sontag’s lover Annie Leibowitz) and where was Linda Stein’s Wonder Woman body armor?

The problem with the Met’s Camp is that it exploits queer culture to set the stage for contemporary fashion design and its sponsors; Gucci and Condé Nast. In doing so it undermines the subversive and oppositional meaning of Camp as a critique of the 1% be they celebrities, industrialists, or politicians.

Clearly, what we have here is more Kitsch than camp. It is more about fashion and style than the opposition, it is the wealthy having fun and flaunting their wealth and privilege for a good cause i.e. Katy Perry’s chandelier and hamburger costumes.
that springboard off the originality of subversive gay culture into today’s fashion designers who have effectively taken the cutting edge of camp out of its natural element and moved it into a realm that is antithetical to its very essence.

Improbably filmmaker, John Water’s Pink Flamingos and shit eating Devine are now acceptable icons in today’s high fashion world. Add Judy Garland singing Somewhere Over the Rainbow which I suppose symbolizes something to the exhibition’s organizers but strikes the gay people who worshipped her as gratuitous.

if you love fashion and Gucci branded display by all means go and enjoy the spectacle. Feast on the rich and famous enjoying themselves and contributing to the Costume Institutes coffers to the tune of 15 million, but don’t think for one nano-second all the photo ops, dressing up and advertising in any way really represents Camp’s historical essence.

Romaine would have sniffed at it and thought it was a party full of posturing arriviste.

One thought on “Camp or Kitsch? The Met Gala”