Harmony and cacophony were elements that concerned Romaine Brooks all her life.

What is most remarkable about Romaine Brooks and her friends is that their generous patronage of writers, poets, musicians, artists, designers and performers made a vibrant cultural scene possible because of their inherited wealth.

From an early age Brooks had a heightened awareness of pattern and decoration, and how objects came together in space. Her aesthetics extend into the realm of both her surroundings, as well as her clothing and art as manifestations of her philosophy. Brooks lived through her eyes and ears. She was fully engaged with the crisis of modernity albeit from a conservative and classicist position which, has been widely misunderstood.

At the age of 14 after returning to the sprawling Chateau Grimaldi that her mother had purchased, Brooks found the flocked wallpaper and elaborate furniture of the rooms her mother had allocated to her intolerable.
She complained that the décor g 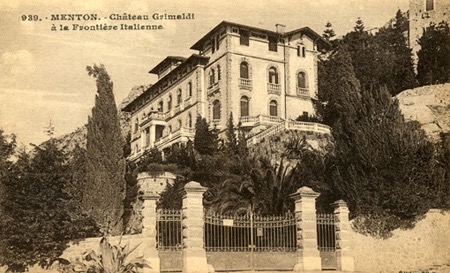 ave her migraines and created a relentlessly screaming sensation in her skull.

Her solution was to cover the baroque patterned walls with gray paper, abolish the elaborately carved, gilded and upholstered chairs and other furniture and replaced them with simple oak tables and comfortable chairs. Creating harmonious modern spaces became a life-long obsession with her that she extended even to her first exhibition in 1910, wherein she covered the walls with a neutral colored material that allowed her paintings to show their individual character.

Throughout her long life she orchestrated her interiors and those of the friends who asked her to decorate their flats as meticulously as she styled her clothing and executed her portraits.